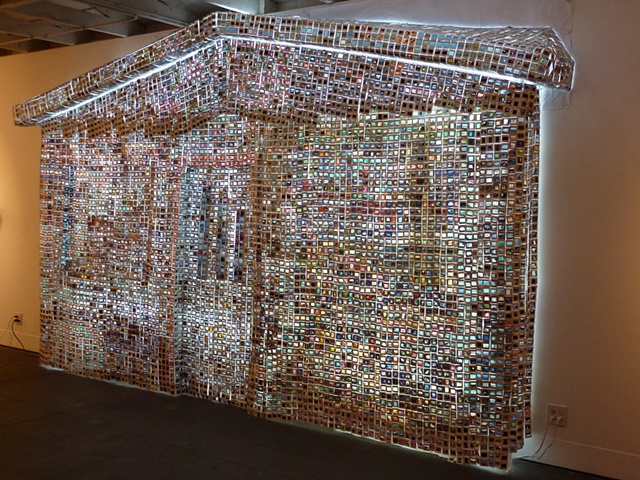 There is no there there in Gertrude Stein's memory. Her recollection of childhood is as curious and non-linear as memory itself.

This piece is made of almost 10,000 35mm slides. I collected the slides by putting ads on craigslist. By far, the largest batch I received, about 2,500 slides, were given to me by a gentleman whose middle-class family and band of friends frequently caravanned to the desert outside of San Diego in the 1950’s and 60’s. I love this era of design. I love the fashion, the cars, the travel trailers. I became vicariously engaged, with a sense of shared memory, in the adventures of these unknown travelers who didn't seem like strangers.

I started using the slides to build flat screens, which later became the façade of a house. Threads of Time weave through a domestic world, making space for me to wonder and ask questions about memory. How do we know what we know? How do beliefs create memories? Are these actual experiences or stories I’ve been told? Sometimes I don’t know. How do we have an accurate narrative of our past, when our memory is made of thousands of moments; random, layered, non-linear, borrowed, and invented? Does it matter? I wonder.

There is no there there. "...Ah, 13th Avenue was the same it was shabby and overgrown and the houses were certainly some of those that had been...yes it might have been 13th Avenue when I had been. Not of course the house, the house the big house and the big garden and eucalyptus trees and the rose hedge naturally were not any longer existing, what was the use, if I had been I then my little dog would know me but if I had not been I then that place would not be the place I could see... If I remember what I remember then why do I remember that. I did remember that but it did look like that and so I did not remember that and if it did not look like that then I did not remember that. What was the use." Gertrude Stein